Fresh eggnog muffins, made with the help of a wee girl.
Yes, they're as good as they look. 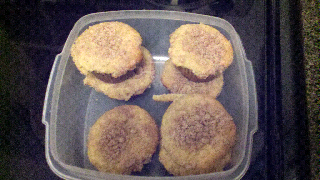 J.D. gets it right

From JayG we have this news from Jack Daniels:

Jack Daniel's Funds Travel Expenses for Soldiers
NASHVILLE, Tenn.-- Tennessee whiskey maker Jack Daniel's is donating more than $100,000 to pay for plane tickets and travel funds for soldiers at Fort Campbell, Ky., to spend the December holiday season with their families all over the country.

The distiller is also asking the public to make additional contributions that could help hundreds of cash-strapped soldiers who otherwise would be stuck at the post on the Tennessee-Kentucky state line. Donations can be made to the Operation Ride Home campaign online at www.jdoperationridehome.com.

Now, as a disclaimer - I was never a bourbon drinker - but if I would have been this would be worth buying at least a case in support of. This is a great thing they are doing & I would encourage everyone who can to either donate to the cause, or to buy a bottle or seven when the urge strikes. I can remember plenty of times when I would see young military members stuck around the barracks for the holidays, just because they couldn't afford the travel home. A chance for these men and women to spend time with the families at home is a gift beyond words.

Interesting article here on the start of a downsizing initiative in the U.S. Navy.

Similar efforts are already underway in the other services. The drawdown of wars, and an even more relevant huge decrease in budgets means that the armed forces are going to be finding reasons to get people to leave. Whether it's overmanned specialties, weight standards, financial troubles or whatever, we are going to be back in the days of people fighting to stay in as opposed to being begged to re-enlist.

What I found interesting though was the portion discussing the current number of Flag officers - 350 Admirals - in a Navy with under 300 ships. Talk about a top-heavy organization.

Now, being experienced in such things, I also know that the Navy is not just ships. You have Flag officers for just about every field - the Fleet, Air Wings, Special Warfare, Intelligence, Supply etc. - so this isn't a case of "an Admiral for every ship."

However, it is a symptom of a bigger problem. The examples I will use are Special Warfare (SEAL teams and their support) and EOD, as I spent the most time around those.

For many years both organizations were headed by Captains at the highest levels. In fact, it was generally considered a career-killing move for an officer to stay in those specialties - they would never get promoted to higher ranks, make it into the "elite circles" of upper officers and all that. On the one hand, this hurt the specialized units in that they didn't have people in "the club" when it came time for budget & turf fights, or when it was time to push for something. On the other hand, it meant that the leadership was in the career path because they loved it, not because they were bucking for rank. But, as time went by, it became more important to ensure you had people in the right places, and more important to "reward" the right ones with promotions and advancement. I'm sure each speciality outside of the "regular" fleet went through similar growth issues.

Along with this the military has contributed to the problem with an "up or out" policy. The days of someone finding a level of competency and riding out their time are long gone - now if you don't get promoted, you are shown the door. Which means if we're going to require people to get advanced to stay, we need a position to advance them to.

And thus we end up with a top-heavy imbalance throughout the organization. Senior enlisted doing the jobs that junior enlisted used to, and upper level NCOs no longer supervising or managing (or even leading) their people but being just another worker in the machine. Junior officers no longer learning leadership but instead spending their time worrying about not screwing up their promotion. Mid-grade officers engaged in the backstab & self-promotion game to ensure they aren't forced out. And the upper level of your organization worried more about who to let in the club, and which lobbying or contracting job to line up for retirement than in leading your service.

The sad part is, after watching it happen before in the 90s, and talking with guys who dealt with it in the 70s, that I know how this will go. The services are not going to eliminate the Flag positions, or the senior officer ranks - the cuts are going to come from the mid-grade enlisted and officers; and more tragically from family programs, health care, base services & living and such. This isn't counting the catastrophic cuts we are facing in equipment, maintenance and training which are going to hit the services as a whole.

The end result in ten years I fear to see.
Posted by Captain Tightpants at 9:35 AM 2 comments:

Like most of the other bloggers within my circle, I dread and loathe the thought of dealing with crowds, stupidity, and the general madness of this shopping season, much less this day in particular. Yes, I'm talking to you, folks who think that pepper spraying a group of people to get a deal on a TV is appropriate... W.T.F.?????

So, this year I have made it my goal to complete all my shopping from the wonderful comfort of my own desk chair - no crowds, no lines and no rush. I can say that between early shopping for my wife, and careful looking for the kids I am now pretty much done. A couple more small things to get, but no rush on them. I also managed to fit in donations to a couple of my favorite veteran's charities - we are blessed more than we often think about, and I felt it was appropriate to give something back.

I hope your day-of-commercial-worship goes at least as smoothly.
Posted by Captain Tightpants at 9:30 AM 1 comment:

May you and your families have a wonderful day, and take a moment to reflect upon all the blessings in your life.
Posted by Captain Tightpants at 9:44 AM 3 comments:

for a place in that "special hell":

Those people who insist on driving down the middle of the gorram lane in a parking lot, and look affronted when asked to share said space with other vehicles transiting said location.

I find them slightly annoying to say the least.
Posted by Captain Tightpants at 8:13 PM 3 comments:

For everyone who's played a computer or live RPG...

Day two of "Death on a Stick" - so no original content here.

But, McSweeney's had another winner today:

The Six Million Dollar Man Writes a Letter
to the United States Department of
Veterans Affairs.

Anyone who's dealt with the VA will understand...
Posted by Captain Tightpants at 11:23 AM No comments:

In general I don't follow, post or care about the activities of the various celebrities. I subscribe to the "Dancing Monkey" belief put forth by Jennifer in terms of their relative importance to the real world and current events.

However I came across a picture today while reading a follow up story which I felt deserved comment and acknowledgement:

This is Justin Timberlake, attending the Marine Corps Ball last week with Corporal Kelsey De Santis. People have already published the story of the invitation extended to Mr. Timberlake and his acceptance of the chance. That in itself is worthy of commendation, particularly in today's entertainment world. But that in itself is not what I felt worthy of note.

Look at this picture. Mr. Timberlake is standing respectfully, with his hand over his heart during the National Anthem - not joking around, laughing or otherwise being disrespectful. He isn't hogging the spotlight, he isn't turning this into a public spectacle - he is giving his hosts and his partner every bit of courtesy and honor due for the moment. Additionally he took the time to write his own reflection of the events afterwards, which was equally well done.

I couldn't name a single one of Mr. Timberlake's songs if you paid me to, I don't know what he does or doesn't do to stay in the spotlight and I don't care. With his actions in accepting the invitation, and his dignified performance during the event, he has shown me that he is a man of class and character. Would that we had more like him.

Roberta writes up perfectly the thoughts of so many of us these days. Give it a read.
Posted by Captain Tightpants at 9:07 AM No comments:

Techs out for a walk

Article and pictures here about military EOD technicians - the roots of our nationwide community - doing a fundraising walk to build an addition to the EOD memorial at Eglin AFB in Florida.

The sad fact is that the memorial has reached capacity for the names to honor fallen technicians, brave men and women who have given their lives rendering safe devices world wide. It's nice to see the community coming together to do something to help remember those who came before.

If you are so inclined here is the link to the EOD Memorial Foundation, which accepts donations from those who wish to help.
Posted by Captain Tightpants at 8:25 AM No comments:

Over the past week I have been very fortunate to have spent time in conversation and email with a number of dedicated men and women. Veterans of the four American services, as well as a few foreign counterparts.
Every one of us has taken a part of our lives to serve something larger than themselves, and shares a bond that cannot be explained. For the rest of our lives we will remember those moments and the things we learned about ourselves.

I am blessed to have made these connections and to have these comrades.

Thank you for your service.

I know there's been a dearth of posts lately... the young monkey was sick first, then the biscuit & now I'm fighting it. Along with that I have a full work schedule & all the other stuff of life going on.

Updates as soon as I can get her spaceborne again folks.
Posted by Captain Tightpants at 8:19 PM 2 comments:

I was saddened to read of the untimely death of fellow blogger William the Coroner.

I enjoyed reading his posts, and our interaction online when it occurred. He was an intelligent man who spent a great deal of his effort and time in educating others. To say he will be missed by the world is an understatement.

Rest in peace sir, and may your family be at peace as well.
Posted by Captain Tightpants at 2:34 PM No comments: