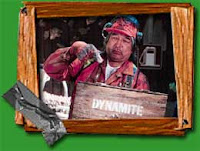 With apologies to Mr. Buffett for the title.

Following a day playing catch-up after yesterday's work, I had just gotten home this evening when the phone rang for another call. Fortunately nothing to it at the end of things, but it added a few hours in the hot sun to a long day, plus rescheduled some other plans. On the positive side of things the patrol officers did everything right, kept their booger-hooks off stuff, and called us when things looked a bit strange - nice to know some of them are using their heads.

A post up on Texas Ghostrider this morning brought the following to mind.

For those who aren't aware, like any group police tend to have their little "sub-groups" with certain characteristics. Motor cops think about tickets, tickets, tickets. Narcs get tied up in playing the role & looking cool. Burglary investigators are just worried about case clearance stats, and can we move to the next one please. SWAT cops play their tacti-cool pose and strut. The poor road officer is overworked & unappreciated by the other cops. We joke about them, tease each other, and all that - but they do often hold true. And EOD guys are considered just a little bit crazy by all the rest.

We get our own share of teasing of course - we are not immune or better than the rest. Jokes range from "we don't do anything" or "all you guys want to do is blow stuff up." Comments about how we have all the expensive toys when no one else has money for stuff.

But we also get plenty of strange looks, and a different kind of respect than other groups (not more, just different) - to your average person or even cop, you have to be somewhat off your rocker to not only work with explosives, but to mess around other people's bombs. The fact that we walk downrange to deal with things designed to blow up just doesn't seem normal to cops, and thus they tend to treat us differently.

I've been introduced to Academy classes as "one of the guys you don't want to piss off, because he'll blow up your car or something." Watched a SWAT sergeant who has done more room entries than I can count back-peddle away from me at warp speed when I asked him to hold onto some explosives while I built a charge. Seen perfectly brave men & women look at myself and my teammates like we had two heads as we calmly discussed how to hand enter a package with a possible chemical agent. Heck, I have a Property Lieutenant who will call me personally to pick up packages that come in for my office, because he doesn't want to consider what might be inside. Like I said, to them we must be a bit nuts to even get into this job.

I can live with that... as the man said, it does keep my mail safe...
Posted by Captain Tightpants at 8:17 PM

First, love that you're a Parrot Head (I'm inferring it from the title) - I knew I liked ya.

Second, I think it's kinda cool that you get to blow stuff up. Maybe a little crazy, but still cool.

Does that make me the Fruitcake?

I still laugh when I remember your first FTO recruit...scared witless youngun.

I'm of the opinion that blowing stuff up is cool...

...If you're a trained professional of course...

And I laughed at your comment on Ghostrider's post. Please tell me no one's actually done that...

On second thought I don't want to know..

Perhaps I have a death wish right now, but I'd trade my current job to work EOD or SWAT in about five seconds. Getting paid to handle guns and explosives? Where do I sign up?

See, I read that and think, "Huh. That'd be an interesting job."

So I'm probably just a little bit off, yes.

Yes, it is definitely an interesting job, with lots of fun moments. I love what I do, and I get paid to do things that a lot of folks never have a chance to try - for that I am grateful!

BUT - it is still a job. It has good & bad days. It has paperwork, unreasonable expectations at times, occasional micromanagers or clueless interference, and all the other stuff. Along with the fact that while yes, I get to blow things up, shoot guns, and all that - I have to not only be able to do so (and train during) the nice days, but also the hot, cold, rain, snow, tired, sore, and all the other stuff. Definitely adds a separate set of challenges.

Don't get me wrong - I appreciate what you all are saying - just a bit of perspective from my side!

Plus, I always remember a bit of wisdom from a senior NCO years ago. He reminded us that yes, we were doing something that not everyone could do - and that was considered special. But we were always to remember that our "special" task was in support of the main objective, it was not the main objective in & of itself. And that we sure as hell couldn't do our job, much less get where we were going, without all those cooks, engineers, aircrew, ship drivers and everything else that some folks looked down on.

I've always tried to remember that & to apply it even now. While I may make fun of the patrol guys, or bitch when they are dumb - I'm here to support them, certainly not the other way around!