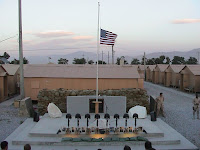 Today is the day in the United States where we take some time to remember those who have given their lives in the service of our nation's military over the past two centuries.

Some will do it by enjoying a day off from work or school, cooking out and enjoying time with family and friends. Others may spend it in quiet reflection for family or friends who have passed on. 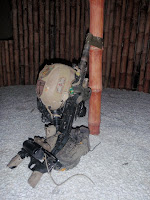 Much is made of the fact that for many people today really doesn't hold much "meaning" beyond that of another holiday. The percentage of veterans in our society is relatively low, and for a large portion of our population the sacrifices made by military members throughout the years really have no personal connection. Today is just another day to party, sleep late, find a few sales and enjoy the start of summer.

Honestly I'm fine with that - I've lived and worked in places where everyone is under threat of attack, where civilians face as much risk of death or injury as soldiers; where armed attack, landmines, bombings, snipers and everything else makes "normal" life impossible. I would rather have a world where the few protect and shield the many from the ravages of war. 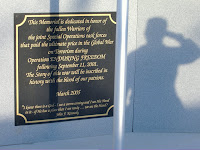 For others of us this day will always be a reminder. Friends and comrades who have died - some in combat, some in training, and some in unfortunate accidents throughout the years. The nature of preparing for and fighting in war is that sometimes people die - it's a dangerous business. Anyone who's served for a period of time has been exposed to this, particularly with the conflicts of the past ten years.

However much they blur into news bites or moments of the past, we owe them this moment of memory, this honor for their sacrifices. For the past four decades in particular every single person in our military has been a volunteer - no draft, no involuntary servitude, just people who stepped forward. Some did it because of a family tradition of service. Others were there for the college plan. Some wanted a personal challenge, others felt they had no other options in a bad economy. But for whatever reason they chose to enter the service of this great nation. Maybe they sought combat and died in battle, maybe they were just a cook or supply person who was in the wrong place at the wrong time. No matter which it means the same.

Over the years I lost many of my own comrades - names and faces which live with me still. Combat in various theaters. Helicopter crashes. Diving accidents. Two unfortunate suicides. Other scattered incidents throughout the world in peace and war.

Brothers, you are not forgotten. I am honored to have served alongside you, and we do our best to remember you as you would have wanted.

Although I don't often wax religious on here, there is a biblical verse which is appropriate. It's one used in the bomb disposal community normally, but in my mind it applies to each and every member of our military:

Posted by Captain Tightpants at 9:35 PM