I've had a "PTSD" type post percolating for a while now - stuff my wife & I have discussed, as well as others from my era... still not ripe enough for writing yet, but this comic does hit on one of the major issues of the differing perceptions we face...
Posted by Captain Tightpants at 9:04 PM 3 comments: Links to this post

Despite what he thinks, Derrick Saunders is not a cop - should not have been a cop - and I am embarrassed to think he ever represented law enforcement.

There is zero excuse for DUI, even less for triple digit speeding, and to have the audacity to then think that you were fired unfairly is beyond contempt.

And the fact that the police union there thinks he should be rehired speaks all I need to know about their organization.

Every time I get annoyed at someone who wants to speak bad about law enforcement I then read something like this which justifies the statements. All I can say is that you can rest assured the vast majority of us want nothing to do with such people, and loathe them more than you do.
Posted by Captain Tightpants at 8:31 PM 2 comments: Links to this post

For the cat people

If you've ever lived with one you'll understand!
Posted by Captain Tightpants at 8:21 PM 2 comments: Links to this post

Larry says it better than I could.
Posted by Captain Tightpants at 8:11 PM No comments: Links to this post 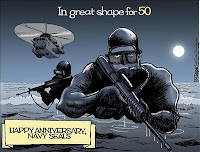 From a beginning so secret that the men involved didn't even know what they were volunteering for, to becoming one of the premier special operations forces in the world & a well-known name - the men with green faces have gone far beyond proving the concept of their original mandate.

Sea-floor to space, desert to jungle, in any environment around the world. I can think of no finer warriors I've had the privilege to work with & even though I didn't wear the trident, I'm honored to have spent time among them, and to call a number of them friends and brothers.

Hoo-yah gentlemen. Here's to your next 50.
Posted by Captain Tightpants at 5:09 PM No comments: Links to this post

So, for the past bit, police work has been quiet... no good stories or such to share...

Then, this past week I managed to have two of the "Momma Fargo" style head-banging-on-the-steering-wheel moments to remind me that I'm back at work.

The first was courtesy of some Federal counterparts, when we were out to do a dog & person bomb sweep before a VIP visit at one of our local airports. After we'd taken care of the buildings, the vehicles etc, the lead agent looks at me and says "So can you sweep the tarmac between here and where we're parking the plane please?" Said runway being as typically flat, level and clean of debris as any modern runway...

My partner and I both resisted the urge to simply look across the bare ground and say "Yep, cleared it." But trust me, it was an eye-rolling moment.

Then, this past weekend I worked another of our DUI patrols. Most of the night was slow & useless, due to the cold weather I think. Just before it was time to wrap everything up I managed to find mine though.

Our fun started with what I like to call the honesty game:

"So sir, how much have you had to drink tonight?"

"OK, you pretty much reek of alcohol, so let's try this again. How much did you have to drink?"

"Nothing," all said with eyes just about bleeding out of his head, and an inability to focus on anything at all.

So it's going to be one of those discussions I quickly deduce.

Then, looking at the center console I ask him, "What's in your glass there?" To which he gives me a vacant look, then before I can stop him picks it up and pours most of it out in the seat next to him...

After I get that issue stopped and resolved I ask him what the hell he was thinking. "Oh, I thought you wanted me to get rid of it."

The night continued much in that vein...
Posted by Captain Tightpants at 9:02 PM 1 comment: Links to this post

That reminds me - I need this on DVD still...

Posted by Captain Tightpants at 9:16 PM 2 comments: Links to this post

One of the joys of children

Posted by Captain Tightpants at 8:23 PM 2 comments: Links to this post

From our local paper:
"Penguins in local zoo well suited to cold weather"

Posted by Captain Tightpants at 4:06 PM 2 comments: Links to this post

Continuing a tradition, I took advantage of some overtime money last night to work a DUI patrol. My wife & I aren't exactly out partying anyway, and the extra cash is always nice.

- What is it with the ghetto and firing your guns in the air at midnight for fireworks? I swear, I thought I was back in the middle east...

- On the whole, the vast majority of people were polite, friendly and sober - which I view as a success all around. I didn't write any b.s. tickets, and most seemed grateful for our efforts.

- There are however still an amazing amount of people who don't seem to care that they don't have a license or insurance when they drive, and yet get all pissy when I tow their car.

- Yes, when you almost hit my big, marked police truck because you're driving like a fool, I will most likely stop you. And when I find out you're drunk (big surprise) it's off you go... thanks for the gift-wrapped one.

- I really hate drunks who turn into big crybabies when I put the handcuffs on - I'm ruining their life, can't I cut them a break, it's not fair etc. etc. Actually, I just saved you. Saved you from hurting or killing yourself, or someone else's loved one. Saved you from dealing with that for the rest of your life. So man up, take your lumps, and think about who made the decisions that got you here tonight.
Posted by Captain Tightpants at 3:24 PM 3 comments: Links to this post